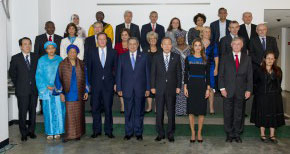 In July 2012, Secretary-General Ban Ki-moon announced the 27 members of a High-level Panel to advise on the global development framework beyond 2015, the target date for the Millennium Development Goals (MDGs).

The Panel was co-chaired by President Susilo Bambang Yudhoyono of Indonesia, President Ellen Johnson Sirleaf of Liberia, and Prime Minister David Cameron of the United Kingdom, and included leaders from civil society, the private sector and other governments.

The Panel was part of the Secretary-General’s post-2015 initiative mandated by the 2010 MDG Summit. UN Member States have called for open, inclusive consultations involving civil society, the private sector, academia and research institutions from all regions, in addition to the UN system, to advance the development framework beyond 2015.

The work of the Panel reflected new development challenges while also drawing on experience gained in implementing the MDGs, both in terms of results achieved and areas for improvement.

The Panel submitted a report containing recommendations to the Secretary-General in May 2013.

The Panel was served by a Secretariat led by Executive Secretary Homi Kharas.
Click here to read about the Secretariat.